The Islamic Republic is complying with a deal to restrict its nuclear program. International sanctions are beginning to be lifted. It was a symbolic date to end a “cold war”: January the 16th. On the same day in 1979, the last Shah left for exile. In an interview, former prisoner Omid Memarian tells me that, after Obama, Tehran intends to “continue the path of diplomacy with anyone who will be elected to the White House”. (Read more…)

An iron gate leading to the splendid Madrasah-ye Madar-e Shah, or School of the Mother of the King, in Isfahan, is half open. Those who enter this seminary built under Safavid Sultan Hossein have to footstep the red and white stripes of the American flag painted on the floor. But what we read on it looks like a harbinger of a new era: “With U.S.A.”. The word “Down” almost goes unnoticed to those leaving the building.

This Iranian theological center is one of the few spaces where we spot slogans against “the great and the little Satan” – America and Israel – coined by Khomeini, the founder of the Islamic Republic.

A few months ago, the entrance to women was still banned here. Now, they pay a ticket before covering their bodies with a chador. The religious severity was probably loosed by the need for revenue (the current government has been cutting funding to hardline institutions).

Signs of a “more relaxed atmosphere” are not only apparent in, or exclusive of, the city that Iranians call Nesf-e jahan (“Half of the World”). The New York Statue of Liberty still has a face of death in the walls of the former US embassy in Tehran.

However, there is almost no trace of the slogans painted when and after revolutionary students occupied what they called the “Nest of Spies” by holding 52 diplomats as hostages, for 444 days, in 1979-1980.

On the streets of Iran, whether in the capital, in Shiraz, city of the poets Hafez and Sa’adi, or in Yazd, Zoroastrians and Jews’ sanctuaries, foreign visitors, or “Guests of God”, are cheered with sincere enjoyment: “Welcome to my country!” 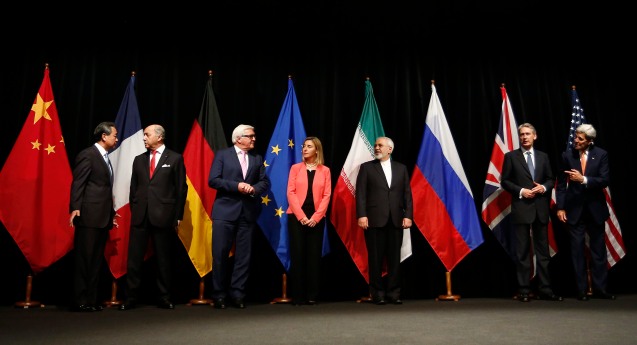 Asphyxiated by a severe economic crisis, the result of a long international embargo mixed with an internal corrupt mismanagement, Iranian society is openly challenging the regime. And in order to survive, the regime had to make concessions.

“When it comes to Iran’s politics, nothing is irreversible”, said, in an interview, Omid Memarian*, an Iranian-American journalist, human rights activist and former prisoner. “The only thing that is irreversible is the people’s willingness for change.”

“Iranian people have, repeatedly in massive numbers, expressed that they are tired of being isolated from the outside world, tired of petty politics and of hardliners increasing repression. In its attempts to normalize relations with the international community, and in particular the US, the Iranian Government is just voicing people’s demands.”

It was a victory of diplomacy, and so history was made on the 16th of January – the same day when, in 1979, the Shah Mohammad Reza Pahlavi left for exile. It was the end of 2,500 years of monarchy.

The International Atomic Energy Agency (IAEA) confirmed that Iran has met its obligations under a landmark nuclear deal with six world powers, signed in July 2015. And the lifting/suspension of sanctions was immediately announced.

In a parallel process (negotiated in secret for 14 months), Tehran and Washington have agreed to an exchange of prisoners. Previously, American sailors who had bee captured by the Pasdaran (Guardians of the Revolution), after entering Iranian waters, were promptly released.

This was surprising since the resolution of similar incidents on previous occasions had been sorely deferred. The merit was given to John Kerry, American Secretary of State, and to Javad Zarif, the Iranian Foreign Minister, who have been establishing friendly ties.

After the release of Jason Rezaian, The Washington Post Tehran Bureau chief, and of four other American Iranians arrested for “espionage” and other charges, Omid Memarian felt “really happy for them”, but he could not avoid to remember his own captivity.

“Prison changes people’s lives forever,” he grieved. “I was kidnapped in 2003 for a month [in the judiciary complex], and spent another month in Evin Prison [where Rezaian was held for 545 days], both in Tehran.”

“My case was similar to all Iranian Americans who were released from prison [on January 16] as there was no real charge in my case. The captors had political purposes in their mind and by arresting people like me they enhanced their leverage. During the interrogation I went through a lot of physical and mental pressure.”

Accused of “spreading a dark picture image of the country and stoking women’s issues” while working with pro-reform newspapers and blogs, Memarian endured solitary confinement, during his 55 days in detention. His head was bashed against a wall repeatedly.

The “moderate” Mohammad Khatami was then President but he was not in a position to help, since his policies were being boycotted, at all levels, by the hardliners.

Under death threats if he denounced the torture to which he was subjected, Memarian was forced to confess that he accepted foreign bribes, and had to apologize to the Supreme Leader, Ayatollah Ali Khamenei. It was a humiliation broadcasted by the national TV.

Memarian’s parents tried to visit him every day while he was in prison. In one of those days, when he was escorted to a court hearing, his mother “pleaded with the guards for a few minutes to embrace” her son. He took the opportunity to talk about his conditions, and asked her to contact human rights organisations abroad. 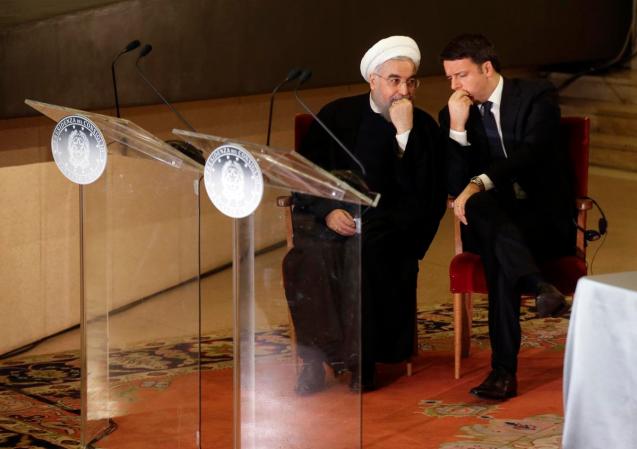 In the first state visit to Europe by an Iranian president in almost two decades, Hassan Rouhani (left) and Italian Premier Matteo Renzi talk to each other ahead of a joint press conference following their meeting at the Campidoglio, Capitol Hill, in Rome, January 25
© Gregorio Borgia | AP

Unlike Khatami, who was snubbed by Ali Khamenei, the current Iranian President has been “blessed” by Ayatollah Khomeini’s successor. The end of sanctions, Hassan Rouhani proclaimed, “is the beginning of a new era”. In the US, his counterpart Barack Obama hailed “a rare opportunity to follow a new path – a different and better future.”

Counting the advantages of a sanctions relief – the embargo restricted trade and investment, exports of oil and gas –, Rouhani promised that his country will not use “for hostile purposes” more than 50 billion dollars of funds that were seized in foreign institutions and are going to be recovered.

“It should be noted that the arrest of journalists and activists in Iran is political”, said the recipient of a Human Rights Defender Award (2005), the highest honor given by Human Rights Watch. “No one of these people did anything wrong in the first place.”

“They were arrested as a pawn for the revolutionary guards that, from the beginning, had an eye on doing a prisoners swap. From previous experiences, they knew that sooner or later Americans would come to the negotiation table, and they finally did. It’s really inhumane.”

While happy that Rezaian and other prisoners are now released, Omid Memarian did not approve Obama’s involvement in the swap.

“It makes traveling to Iran risky for foreigners as the IRGC [Guardians of Revolution] might do the same thing, as they know that it works! International pressure by the media and civil society is the best way to embarrass the government and judiciary in Tehran, rather than being involved in a process that just emboldens belligerent forces within the Iranian intelligence forces.”

The embargo was not yet fully lifted, as the US. American companies are still forbidden to invest in the prospection of Iranian oil, a lucrative business already being exploited by European companies.

America has also imposed new sanctions on Iran’s ballistic missile program, for “violating UN resolutions”. Last October, the Iranians tested one of these missiles, but denied they are capable of delivering nuclear warheads.

Omid Memarian explains: “Iran finds itself surrounded by powerful countries that are armed to their teeth by world powers. Many in Iran and also in the Arab world believe that Iran’s nuclear program was not targeted towards Israel, even though Iran’s rhetoric looked like that was the case, but towards Saudi Arabia.”

“It was more to balance the power. With all the arms sales to Saudis and Pakistanis and Turkey, Iran wants to show strength.”

“It was also a sign from hardliners in Iran to the moderate government that, despite the nuclear deal, they still continue their programs, as they believe that nothing has changed between Tehran and Washington, except the signing of a deal that many people in the Revolutionary Guards find troubling. They think Iran compromised so much and in return didn’t receive that much.”

“There is a serious power struggle inside the country, between the moderate government and hardliners who control both the military, the judiciary and Iran’s state TV and radio”, added Omid Memarian.

Nevertheless, “the more diplomacy works and the more Iran finds out that it could be more effective in the region in pursuing its national interests by continuing the current path, the more hardliners will be pushed back.”

“It also shows that the Iranian government doesn’t have that much power. It walks on a very thin rope, which could be stronger if its diplomatic efforts receive attention and bring impact.”

“After Barack Obama, it would be a different era”, acknowledges the former prisoner. “We have to see who will be the next president, a Republican or a Democrat. However, I believe the Iranian government intends to keep the course of events in a way that it continues the path of diplomacy with anyone who will be elected to the White House.”

“Iran’s stance in the region and the world highly depends on its relationship with the US, and the current government in Tehran fully realizes this reality. With all the rivalries with Saudis and other Arab countries in the Persian Gulf region, coupled with Iran’s struggles in Iraq and Syria, better relations with the US would be very helpful and would be great for Iran’s national interests.”

“Relationships are a matter of necessity,” according to Omid Memarian. “Iran needs to change the course. Both economically and politically, and more importantly, because of issues related to international security. So it’s for the good of the regime in Iran.”

“It’s the realisation that by continuing animosity with the US, Iran loses more and more in the region and the world as a whole. The new course of diplomatic efforts by the government will surely make investors confident about Iran’s stability. It will make Iran a much more active and impactful regional and global player and that would enhance Tehran’s influence in resolving regional conflicts and disputes.”

“Iran is serious to become a more influential power in the region and leaders in Tehran have realised that they can’t do much if they exclude the US, or the US excludes them. So yes, Iran will not jump into more disputes with Saudis, and will try its best to neutralize tensions – unless something unexpected happens. We will see that Iranians will tone down, however they might keep their tough rhetoric.”

[*Omid Memarian  born and raised in Tehran, is a journalist, analyst and Deputy Director at the Center for Human Rights in Iran. He has worked with civil society and media organizations in Iran for the past 18 years. Prior to emigrating to the US in 2005, he was the editor in chief of the Volunteer Across Quarterly, a pioneering Iranian magazine dedicated to civil society issues.

A World Peace Fellow at the UC Berkeley Graduate School of Journalism (2007-2009), he is the recipient of the 2005 Human Rights Defender Award, the highest honor given by Human Rights Watch. His writings have appeared in the New York Times, Los Angeles Times, Wall Street Journal and Time.com. He lives in Brooklyn, New York.]

This article, now updated, was originally published in the Portuguese newspaper EXPRESSO, on January 22, 2016