The French-Lebanese historian who wrote The Arabs and the Holocaust: The Arab-Israeli War of Narratives has zero tolerance to deniers of the genocide of up to six million European Jews. A great part of his book is devoted to Haj Amin al-Husseini, former Grand Mufti of Jerusalem, and to his encounters with the Nazis during World War II. Following Netanyahu’s accusation that the Shoah was the brainchild of the late Palestinian spiritual leader and not of Hitler, I called him in Beirut where he was on sabbatical leave of the International Relations chair that he teaches at the School of Oriental and African Studies (SOAS) in London. (Read more…)

Israel’s Prime Minister Benjamin Netanyahu told the World Zionist Congress that Hitler wanted to expel the Jews, but was convinced to exterminate them by Palestinian leader Haj Amin al-Husseini
© countercurrentnews.com

How do you assess Israeli Prime Minister Benjamin Netanyahu’s statement condemning Haj Amin Al-Husseini and not Hitler as the main architect of the Final Solution?

Netanyahu shocked the whole world by trying to exonerate Hitler. The only reason I can find for his outrageous speech is that Netanyahu hates the Palestinians more than he abhors Hitler.

This is dreadful. I’ve always seen this revisionism in the pro-Nazi and anti-Semitic side, not in the Zionist side. This revisionism, now expressed by Netanyahu, is amazing. From a historical point of view, what Netanyahu said is utter nonsense. Even the German government immediately refuted what he said [assuming the Holocaust as being of the country’s single responsibility].

On the far right of the Zionist movement there is such a deep hatred of Palestinians that is not difficult to find an affinity with Hitler, trying to absolve him of his sordid crimes. Perhaps because they [the far right] want to get rid of the Palestinians – not by using the genocide, but through expulsions or mass transfer.

This is very dangerous and tragic. Netanyahu is an opportunist politician, able to express himself in a very demagogic way, according to his audience, to get what he wants

It’s not the first time Amin al-Husseini is invoked to associate the Palestinians to the Nazis. What was the relationship between the Grand Mufti and Hitler?

Amin al-Husseini was a right-wing nationalist, without scrupulous and deeply anti-Semitic. Unlike Hitler, however, the nature of his anti-Semitism was the growing Zionist colonization of Palestine – this is not a justification, but we must distinguish his anti-Semitism from the anti-Semitism in Germany, where the Jews were an oppressed minority.

When he cut ties with the British and moved to Berlin [in 1940], Husseini allied with the Nazis and participated in their propaganda, but he played no direct role in the Final Solution.

Husseini did not learn of the Final Solution until the summer of 1943 – he says so in his memoirs, where he makes clear that he has no regrets of what happened ‘because the Jews deserved it’, an attitude that demonstrates his deeply anti-Semitic dimension. However, to say that the genocide was carried out because Husseini recommended it is totally ridiculous.

The discussion between respected historians is whether genocide has always been one of Hitler’s plans or resulted from his defeat in Russia.

Not a single historian has ever debated whether Husseini influenced the Final Solution, because Hitler despised him Even Hitler’s body language when he was with the Palestinian leader denoted contempt. Netanyahu’s attempt to revise history is a serious signal of mental illness. 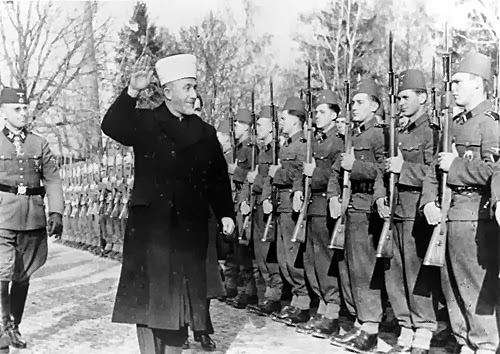 According to the Israeli historian Tom Segev (in an article published in The Guardian), Husseini asked Hitler to sign a kind of Balfour Declaration in support of Palestinian rights, similar to the British document that called for a ‘national home for the Jews’, but Hitler refused. Segev also says that the Arabs were not the only ones who were seeking a deal with the Nazis: “At the end of 1940 and again at the end of 1941, before the Holocaust reached its height in the extermination camps, a small Zionist terrorist organisation – Fighters for the Freedom of Israel, also known as the Stern Gang – made contact with Nazi representatives in Beirut, hoping for support for the struggle against the British. [One of the Sternists, in a British jail at the time, was Yitzhak Shamir – who would be Israeli prime minister and one of the leaders of  Netanyahu’s Likud party”...

… Yes, part of the far-right Zionist tried to collaborate with the Nazis. More: there was in Germany a Jewish movement that collaborated with the Nazis. It was the only Jewish group allowed to remain in Nazi Germany, and helped the Nazi authorities in the transfer of German Jews to Palestine.

This collaboration lasted until 1941 – a fact that has been recorded by all historians of the Holocaust. Personally I do not like to get into this game.

The right wing collaborated more with Mussolini, perhaps because it was less problematic. The collaboration of Jews with the Nazis ended, naturally, when the Final Solution began. What should interest us now is the collection of historical facts and the lessons that we should learn from them. Netanyahu is not following this path. 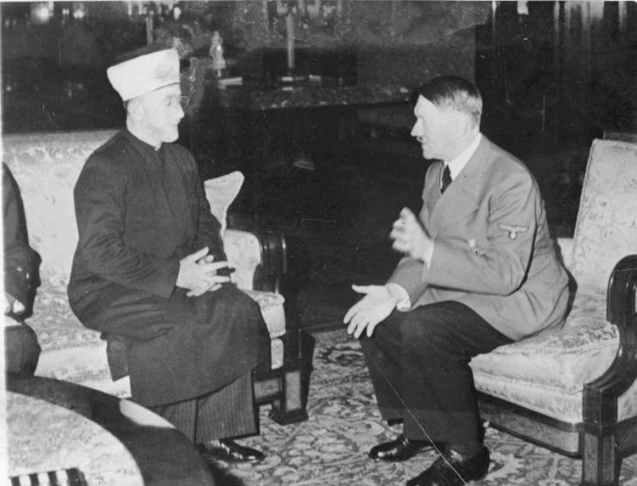 In your book, you acknowledge that several Arab leaders, not only Husseini, openly collaborated with the Nazis, and that others remain Holocaust deniers. But you also oppose the generalization of this anti-Semitism, distinguishing it from the “anti-Jewish feeling deeply rooted in Europe”. Can you explain?

If a German is anti-Semitic, that’s racism against a minority that, for centuries, has been oppressed in Europe. A Palestinian expresses anti-Semitic views because he feels powerless in a state that demands to be recognized as Jewish, ignoring the Israeli citizens who are not Jews.

In view of the requirement of an ethnic definition, Palestinians are tempted to adopt anti-Semitic positions – and they should be criticized for it – but it is a situation similar to that of the black South Africans when they protested against whites during the Apartheid regime. It’s not black-white racism. It is a form of the oppressed to rebel against their oppressors.

The truth is that there are still many deniers of the Holocaust in the Arab world, not just Palestinians…

Yes it’s true. They deny, above all, that they are responsible for the Holocaust, which was committed by Europeans. It is worth emphasizing that there were many more Arab soldiers in the Allied ranks than on the camp of the Nazis.

It is almost negligible the number of Arab fighters who joined the Nazi side during the World War II, compared to the sheer number of soldiers from North Africa and the Middle East who supported the British and the French troops.

There were 9,000 Palestinians in the British Army! It is true that there are still many Arabs who deny the Holocaust, but it’s a way – completely stupid and I call them ‘anti-Zionist crazy’ – to express their anger against Israel. However, we must underline that this denial cannot be compared to the denial of the Holocaust by Europeans whose countries were protagonists of the genocide.

It’s stupid, I reaffirm, that there are Palestinians still denying the Holocaust, but it should be noted, too, that the State of Israel continues to deny the Nakba, the 1948 Palestinian catastrophe, which was committed by Israel.

This is even more serious. It is also very serious that the Turkish authorities continue to deny until now the Armenian genocide [in 1915-1917, during the Ottoman period]. 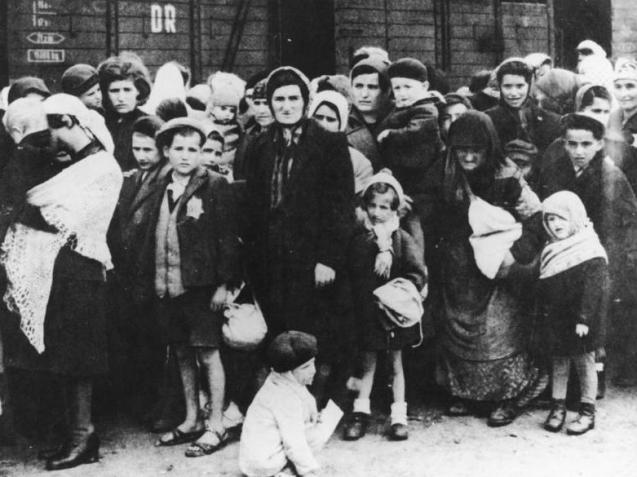 Jewish women and children from Carpatho-Ruthenia after their arrival at the Auschwitz death camp, May/June 1944
© Times of Israel 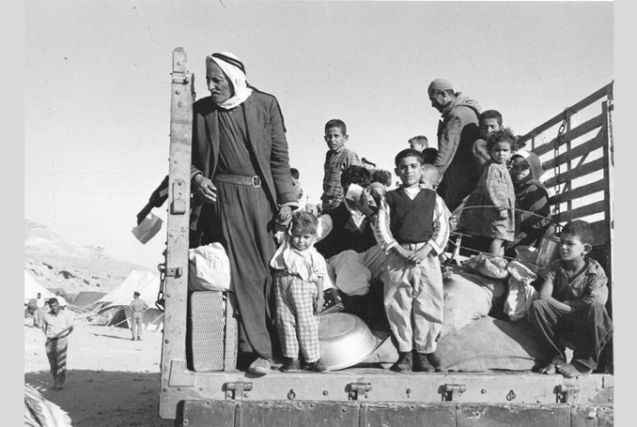 “It’s stupid that there are Palestinians still denying the Holocaust, but it should be noted, too, that the State Israel continues to deny the Nakba, the 1948 Palestinian catastrophe (pictured here), which was committed by Israel,” Achcar said
© palestinechronicle.com

After 1948, the word “Holocaust” has been used and abused, by Palestinians (who demand recognition of the Nakba and define themselves as “victims of the victims”) and by Israelis. The former Prime Minister Menachem Begin, for instance, used to compare Yasser Arafat, the PLO leader, to Hitler. And the Israeli philosopher Yeshayahu Leibowitz dared coin the expression “Judeo-Nazi“. To what extent is the Zionist ideology contributing to “banalizing evil”?

Elie Wiesel [Holocaust survivor and Nobel Peace Prize winner] is the one who has been promoting a more broad approach to the Zionist ideology. It is a very bad word. The biblical meaning is the burning of offerings to God.

This is very dangerous. It’s like a representation of the Jews sacrificed in the name of God. From time to time, a crazy rabbi describes the Holocaust as a divine punishment, because Jews did not obey His laws. Of course, this generates criticism.

To be honest, I think the statement of Netanyahu regarding Husseini and Hitler fits in the same category: ideological madness. Anyway, the big problem is not this Netanyahu’s statement, but the State of Israel’s attitude not only against the Palestinians under occupation but now also against Palestinians of Israeli citizenship who are subject to more and more racism – documented by Israeli human rights organizations.

The world needs to understand that Israel does not represent the victims of the Holocaust. What Netanyahu said exonerating Hitler should sound like an alarm ring, especially in Europe, which must react before it’s too late.

Gilbert Achcar, author of  The Arabs and the Holocaust: The Arab-Israeli War of Narratives
© All Rights Reserved

This article was originally published in the Portuguese newspaper EXPRESSO, on October 19,2015