Shaul Judelman and Ziad Sabateen plan to create the Heavens Field Farm, which will put “emphasis on belonging to the land, not ownership of it,” according to their joint manifesto
© Udi Goren

Shaul David Judelman is an Israeli rabbi who moved from Seattle to Bat Ayin, a religious community in the occupied West Bank. Ziad Abed Sabateen is a Palestinian farmer who endured imprisonment during the first intifada against the Israelis more than 20 years ago and whose family was dispossessed of most of its land to accommodate Jewish settlers. The two men are good neighbors, friends, and business partners – not enemies.

Mr. Judelman and Mr. Sabateen are committed to “peaceful coexistence” between Israelis and Palestinians, whether they live together in one state or two separate states. The majority of those in both their camps may find it hard to understand the two men’s close relationship. But neither side repudiates them as traitors or collaborators.

“A few months ago, a Molotov cocktail was thrown at a Palestinian taxi; the client was burned very badly,” Judelman recalls, one hand clasping the zizit (knotted fringes) of his tallit (prayer shawl), the other curling hispeyots (sidelocks), all symbols of his status as an ultra-Orthodox Hasidic Jew.

“Afterwards, I went with my wife to visit them. It’s like God’s design that there would be a news camera while we were there. They’ve shown a clip of me praying with the brother, one of the kids. When people in Bat Ayin saw that, they’re like, ‘What are you doing? You’re claiming the guilt….’ “But at the same time a lot of people also came forward and said, ‘Shaul, right on that you went there. It was such a good thing to do.’ Some said they also wanted to go to the hospital. So, even within the [Israeli] settlement, you have lots of different voices.”

A similar episode happened with Sabateen, who lives in the Palestinian village of Husan. “Once a kid stabbed a [Jewish] settler, and I offered to be a mediator between the families of the attacker and of the victim,” he says, his Hebrew translated into English by Judelman. “It was possible to reestablish the harmony without calling [in] the [Israeli] army, which would make matters worse. This is a method of solving problems that we are now testing.”

Recently Judelman went to meet Sabateen to trade a big empty container for two filled with Sabateen’s olive oil. They shared wide smiles and a brotherly embrace. Afterward, they went off to inspect the soil and water of the green fields teeming with trees, flowers, herbs – and scenic hidden springs. The terrain they walked is difficult but of stunning beauty, almost like a metaphor of their comradeship.

It is here, on a mountaintop with a view of the Mediterranean Sea, that Judelman and Sabateen plan to create the Heavens Field Farm, which will put “emphasis on belonging to the land, not ownership of it,” according to their joint manifesto.

Their idea is to run an organic farm that will sell vegetables in local markets, support families in need, and attract volunteers and tourists. Among their partners are a joint Israeli Palestinian journal, called Maktub, and other nonpolitical groups such as Eretz Shalom (Land of Peace).

It will not be easy to surmount the bureaucratic and security obstacles enforced by both Israel and the Palestinian Authority. The latter discourages so-called normalization of relations before a political settlement is reached. So “teacher-ecologist-musician” Judelman and Sabateen are trying to present their dream as a “spiritual,” not a business, endeavor. 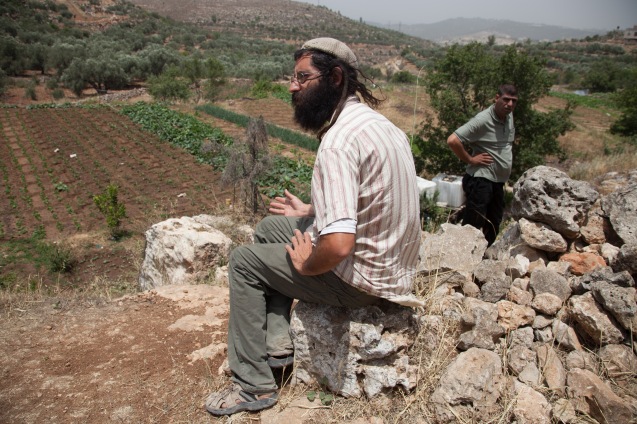 Bat Ayin, part of the Gush Etzion settlements bloc situated between Jerusalem and Hebron, was established in 1989. It is reputed to be “very aggressive toward the Arabs,” Judelman acknowledges.

Why, then, did this eldest son of “secular and leftish” parents who left South Africa “because they didn’t want to be a part of apartheid” decide to join it when he was 21 years old?

“I wasn’t religious, but my surname is Judelman, which means ‘Jewish man’; my Jewish identity was always part of me,” he explains. Born in London, he underwent a metamorphosis that included being deeply influenced by native Americans, with whom he worked on a Navajo reservation in Arizona.

Like native Americans, Palestinians claim to be the original owners of land taken by outside settlers. “I am torn,” he confesses. “It is very important that Jews and Palestinians engage each other, and they are not doing enough. I accept the Palestinians’ desire for self-determination and the right to achieve a national state. But I don’t know if that’s a road to peace or to war.”

For Judelman, the Israeli occupation creates a wall of separation, with checkpoints and soldiers who humiliate Palestinians trying to get to work by forcing them to wait in line for hours, even if that means they must get up at 3 a.m. to get to work on time. “We [Jews] died and bled and fought for the right to have a nation-state,” Judelman says. “Yes, there’s horrible stuff going on. I don’t always blame the other side. [But] we have to change attitudes among our own people, and that’s why I’m here.”

The Israeli settler and the former Palestinian prisoner: an improbable friendship
© Udi Goren

Originally, he says, some 40 families were given large plots of land at Bat Ayin. It had dirt roads and no electricity “in order to support an agricultural vision respectful of nature.”

Now, he regrets that “only a few are supporting themselves like that. We have doctors, builders, plumbers, electricians, psychologists…. [T]here’s really a very distinct amalgamation of people that have come together. There are about 200 families right now. A lot of them are tenants.”

What did not change is the prohibition on hiring “non-Jewish laborers” or using pesticides, as well as the imposition of rigid social norms. Married women have to cover their hair; men wear beards. There are no television sets, only selected newspapers, and Internet service “ideally [has] a filter, so there are no pornographic sites and stuff like that.”

Isolated from the rest of the world, many young people leave; Judelman also wants to move in three years’ time. “The religiosity in Bat Ayin is a little bit too black and white,” says Judelman, a disciple of the late Rabbi Menachem Froman, who promoted dialogue and negotiations with Palestinians. “I want my two children to grow [up] around different people, religious and nonreligious people.”

Judelman wouldn’t reject a political solution that would allow Jewish settlers to vote in Israel and pay taxes to a Palestinian state.

And Sabateen is comfortable with the idea of Jews living in a Palestinian state, just as there are Arabs that live in Israel. “Yeah, sure, I accept them in Palestine, and I don’t call them ‘settlers,’ but neighbors, people like us,” Sabateen says with a laugh, putting an arm around Judelman’s shoulder. “We are Arabs, and we work in Israel; maybe Jews will serve our state, too.”

The father of three girls and two boys, Sabateen considers his past as a “security prisoner” in Israel for five years, from 1988 to 1993, to have been a “life lesson.”

“I used to throw stones against soldiers and was arrested the first time when I was 15,” he recalls. “I got married at 20, [but] after my kids were born I pray to God there will be peace.”

Close to Bat Ayin, part of the Gush Etzion settlements bloc situated between Jerusalem and Hebron, there is a supermarket where Jews and Arabs go shopping. It is a place of silence more than of dialogue
© Udi Goren

Sabateen says he lost “lots of land,” confiscated since 1985, “without financial compensation” to enlarge Israeli settlements. His sister “was deported to Jordan and can’t [come] back” to what was once the family properties.

Why did he forgive the Israelis?

“I asked myself: Is this the right way or not? I went through difficult times. If I keep walking this path [of armed resistance], what am I going to get? If one bullet kills me, what do I give to my nation and to the world? I found that the way to peace is the best one. Blood just means blood. Revenge just means more vengeance.

“To change what one thinks is not easy,” Sabateen adds. “I thought that the uprising was the way, but it will only destroy us. I was among the first associates of Combatants for Peace [a group of former Israeli soldiers and Palestinian militants]. One day, I was told that a group of [Israeli] settlers was coming to protest [for peace] and ordered to check it out…. I never heard before of settlers wanting peace.

A Palestinian man in front of the Kiryat Arba settlement on the outskirts of Hebron, occupied West Bank, which was built “under false pretences to circumvent international law”, according to a secret document from 1970 released in 2016
© Getty Images | The Independent

This article was originally published in the newspaper The Christian Science Monitor, on October 4, 2013 (here)