Congo is the “worst place in the world to be a woman”, but the founder of Maman Shujaa, a women-led initiative that uses digital media to promote peace and “change the rules”, refuses to be a victim. Her disability did not kill her dreams. In spite of an endless war she is determined to empower the voiceless.  This is her story*. (Read more…) 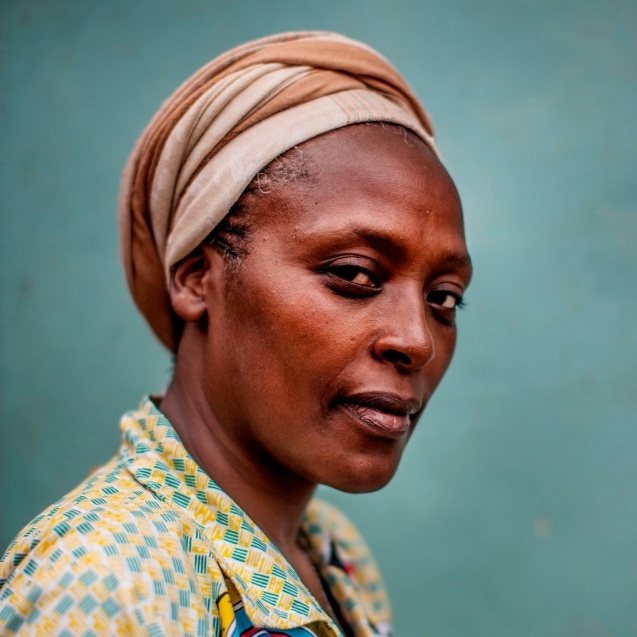 Neema Namadumu:”I have learned that making the impossible possible simply requires a different set of rules. And I’m all about changing the rules. I believe in miracles!”
© Pete Muller | Prime for the Nobel Women’s Initiative

I was born in a very remote mountainous area of eastern [Democratic Republic of] Congo, in the village of Marunde, in what is nowadays called Itombwe sector of Mwenga Territory, in South Kivu province. We lived then as most everyone there still lives today: in mud huts with grass roofs and dirt floors.

Though I am considered the eldest child of six children born of my mother, I was actually the fourth child born, but the first that lived. Then at the age of two years, I somehow contracted polio.

It was a very trying time for my mother. She traveled by foot with me on her back for many, many miles, for months, to hospitals at one end of our province then to the other in search of a solution.

In the highly religious culture of our society, having a child that has some problem or deformity is considered a curse from God. But I know that those notions never found a place in my Mom’s heart or mind, even though my father married a second wife to give him healthy children.

When I came to a certain age of maturity, begging to go to school like other children, I was allowed, even though I could easily overhear conversations had in my presence, as though I didn’t really exist, that my parents shouldn’t waste school fees on me, or any other amount of energy or attention.

It was considered shameful that when it was rainy and the stick I used to pole-vault myself along on the muddy trail couldn’t keep me upright, that my Mom would meet me on my way and carry her handicapped child the rest of the way home on her back.

On the long walks home from school, riding on her back, I would tell my Mom about my day, maybe about some problem I had. She would tell me that God had a special plan for my life. 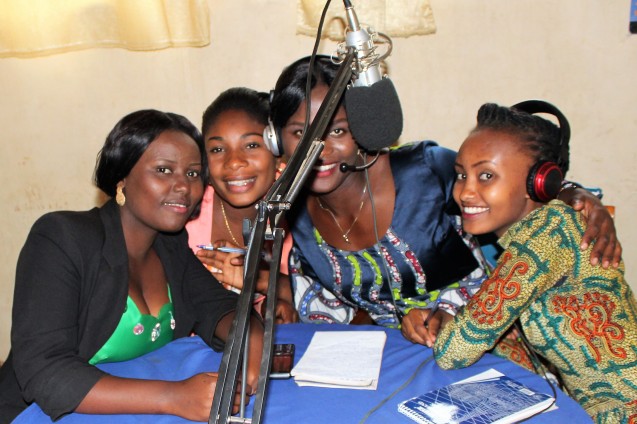 Neema is promoting the empowerment of Congolese women
© Maman Shujaa

My Mom was illiterate. She couldn’t read or write her own name, but she was my life-professor. She taught me about love, sacrifice, and faith. Really, she was God’s instrument to constitute me with a Christ consciousness of love for all, of purpose for all, and destiny for all.

Yes, I have a disability, but I am not disabled. I can’t even consider letting my disability disable me. Maybe I struggle more to get around and do everyday things than people without a physical disability, but no one is without a struggle of some sort.

Besides that, my disability makes me unforgettable. People remember me because I am different. I could say to someone who feels sorry for me, what makes you think it is a bad situation? Let me tell you the upside to my disability.

In the area where I was born, girls are married at the age 14 and 15 years, sometimes as second wives to very old men who are widowers. They are slaves for the rest of their lives to that oppressive culture.

As a handicapped girl, no one ever even considered marrying me to clean and cook, work the plantation and have their babies. I escaped that cycle of life for girls in Marunde because I had a disability. Cursed you say? Blessed, I say!

After the Rwandan genocide [April-July 1994], the genocidaires allowed to take refuge in Congo began killing the Congolese Tutsi (or Banyamulenge) as well. I had recently graduated high school when the UN created a program for eligible Banyamulenge to escape the threat on their life by going to university at Rwanda’s national university. I went there [and became the first girl of my tribe to win an academic degree].

In the university I fell in love with someone, but complications arose after he asked me to marry him. Both of our families didn’t want him to marry a woman with disability. We stayed together but when our daughter, Rachel, was nine months old he died of cancer at a hospital in Uganda.

Shortly after that, I adopted Letithia, a girl whose parents were killed in the Rwandan genocide. She was maybe only 14 at the time. 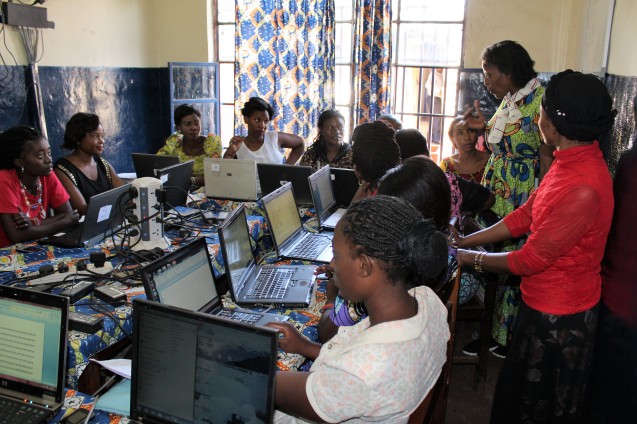 Neema Namadamu: “The once voiceless women of Congo had gone online and gotten the attention of the world. I asked my sisters what they wanted to call themselves at one of the evening sessions in the cyber café, and seemingly with one voice, ‘Maman Shujaa’ [Hero Women] rang out”
© Maman Shujaa

In 2008 I met a man from the U.S. at a conference in the very remote area where I was born. We were both speakers at the conference. He moved here in 2009 and we were married in 2012. A loving and supportive husband, he adopted Rachel in 2014.

[In 2011], Letithia was indiscriminately beaten by soldiers, just a block from the house we were renting. When I received the call from my daughter I was so shocked. As a woman of some standing, it was well within my power to make some noise, call the Commander and exact my revenge on him and his young soldiers.

But as I was sitting there with my daughter when she got home, looking for words to console her, I thought about what I want for her. Not in that instant, but in life.

It was indeed an epiphytal moment. What was the outcome I wanted? As I considered, I was seeing a bigger picture than just the two of us, but one that included the boys, their commander, my city, my country, even the world. A few days later I walked on my crutches down the dirt road to the soldiers camp, and immediately asked for the boys.

The Commander came out, and all around me heard me address the boys as Mom. A Mom who thought better of them than what their actions had demonstrated, that expected better of them in the future, that would be caring from them and keeping them in my heart. As I was leaving, they begged me to come back soon. They’d experienced love, and love healed everything.

[Afterwards] I stumbled onto World Pulse, an online forum for women around the world to converge in solidarity and support of one another’s agenda. As I began blogging from this “worst place in the world to be a woman”, as Congo had just been characterised by the U.N., I began developing a following.

I was given around $4,000 for a six-month pilot, and in July of 2012, rented space in a local cyber café for three hours each evening, inviting other grassroots women leaders to come and learn the computer.

I helped them all get email addresses and taught them how to write a compelling story. Within a few months, hundreds of stories had been blogged on the World Pulse forum.

In November 2012, Rwandan-backed M23 [a group of Tutsi rebels] took control of Goma, the capital city of the province of North Kivu, and was threatening to march through Bukavu (where I lived) all the way to Kinshasa to overthrow the government.

I discussed the situation with my Congolese sisters and decided to file a petition for [former U.S.] President Barack Obama to appoint a Special Peace Envoy to DRC.

[The purpose was] to create a lasting peace solution for Congo – one that ensured women would be at the table negotiating our future. Within a couple weeks, the Petition had reached over 100,000 signatures from around the world.

On January 20, 2013, I received a phone call that I had been invited to the White House to meet President Obama’s National Security Council to present our petition. Then June 19, Russ Feingold was appointed as U.S. Special Envoy to DRC and the Great Lakes Region.

A movement had begun. The once voiceless women of Congo had gone online and gotten the attention of the world. I asked my sisters what they wanted to call themselves at one of the evening sessions in the cyber café, and seemingly with one voice, “Maman Shujaa” [Hero Women] rang out.

New opportunities began to emerge, beginning with the Girl Ambassadors for Peace program, a mentoring project to inform the next generation of Maman Shujaa about U.N. Security Council Resolutions concerning women, and women’s rights as mandated by the Congolese Constitution and Family Code.

Then came along the conservation program, as SAFECO [Synergie Des Associations Feminines Du Congo] went into indigenous and other villages living in and around the forest, petitioning for support in preserving their natural habitat against the constant threat of mining companies coming and destroying their environment. 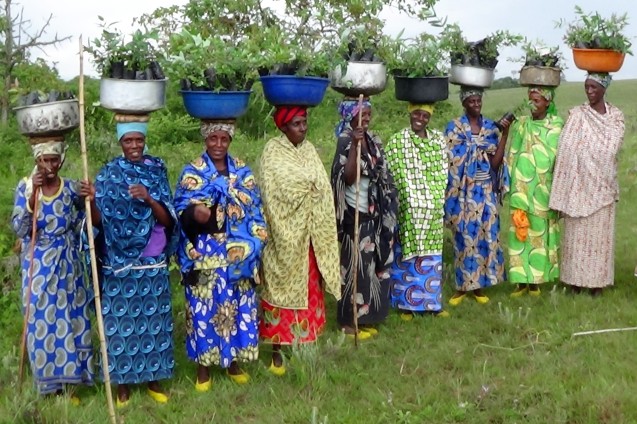 Congo is the richest nation in the world when it comes to natural resources [gold, diamonds, copper, cobalt, uranium, coltan and oil] more than Saudi Arabia, but as a people we are among the poorest per capital, and are in the basement of every human development index.

That SAFECO program has grown such that the Maman Shujaa have been able to establish four tree nurseries and are planting trees to reforest some of the devastated areas of Congo’s rainforest – the second largest in the world.

We receive around $30,000 per year in individual donations, mostly online from the U.S. on our website at www.HeroWomenRising.org. We have also been blessed to get some sponsors. We are working hard to do what we are able to do.

But this is just the beginning of our history. Most of what the Maman Shujaa will accomplish and the impact they will have is yet to unfold. Leading is what women do.

Yes, the situation is bad. The nation is telling the world that the sexual violence rates are way down. [According to some estimates, “approximately 400,000 women are raped each year”], but it’s just a marketing campaign to sell an image. The truth is, rape is still a serious problem, poverty and hunger is a serious problem that is getting worse by the day.

Women must be sitting at the table that “negotiates” for our countries, our regions, and our world’s future. And not just in token number, but in equal representation. For when peace is the goal and peace is present, the negotiation simply becomes agreement.

I have no ambition outside of what God is doing in me and through me. When we come together to do the things we’ve been given to do, there is God in the midst doing the real work. I don’t think there is a better work on the planet.

I have never considered giving up. It’s not my program. I’m just the more than happy instrument of God’s purpose. 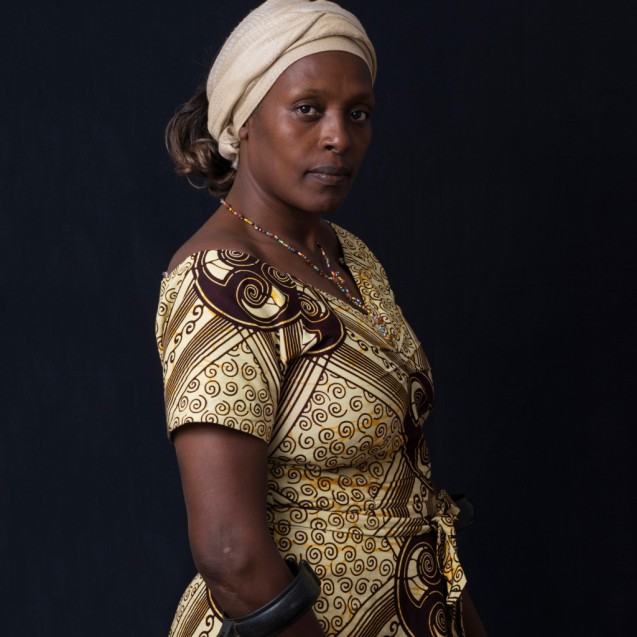 * Based on an email interview, this article was published in the WORLD MISSION magazine (Manila, Philippines), 2017 edition