Historian Avner Cohen is professor of Nonproliferation Studies and Senior Fellow with the Center for Nonproliferation Studies at the Middlebury Institute of International Studies, in Monterey (California). His internationally recognized areas of expertise include the Israeli nuclear program; nonproliferation issues in the Middle East; nuclear disarmament and nuclear weapons free zones”. His most acclaimed book, Israel and the Bomb, was published in 1998 and the latest work, The Worst Kept Secret: Israel’s Bargain with the Bomb, was published in 2010. Dr. Cohen gave me this interview for an article published in the Portuguese newspaper EXPRESSO following the historic deal reached between Iran and six world powers over its nuclear programme. (Read more…)

Was this framework deal a surprise to you?

Can you explain why?

Yes. It put very tough restrictions on Iran, and some of them are only for ten years but others, in terms of the amount that Iran can accumulate, in terms of percentage of [uranium] enrichment that Iran will be allowed to do. Some [restrictions] go from 15 to 25 years. Specially, it is a complex scheme to put quite tangible limitations on Iran. It is not perfect, but is seems to me very much the right compromise.

Is it a compromise that Israel will accept?

It is not a treaty, so the Congress does not have to approve the text. But Congress will be involved in some fashion. It is not clearly politically in America, and I think Israel is going to try to mobilize the Congress to be against [the deal].

It is not clear to me and it is not obvious that Congress will be able to jeopardize this agreement. If the United States will be loyal to that [the framework] and the Iranians as well, I think that in this case Israel will live with it.

Remember that this only the general parameters, a framework of principles. The details, the entire thing, will be known only in three months [June 30]. This is a general outlook not the full blueprint for implementation. So, it is good but again the devil is in the details. Let’s wait to see how it will work out in the next three months.

And three months in the Middle East is a long time…

The negotiations were a very long and difficult process, but why was it possible now to reach this compromise, with the apparent blessing of hardline Iranian Supreme Leader (Ayatollah Ali Khamenei) and not earlier, under reformist President Mohammad Khatami?

I think that it needed time, in part to make it clear to the Iranians that only a deal would permit to lift the sanctions. The Iranians can tell a nice story but the limitations imposed on them are really tough.

When the agreement will be implemented the sanctions will also be put aside, as long as Iran keeps their agreement. There were great incentives for Iran to go ahead with this agreement.

I think the young generation and various segments of Iranian society wanted Iran to be back into the community of nations, to have trade, to have commerce and to remove the sanctions. If you noticed, [the Foreign Minister Mohammad Jafar] Zarif and [President Hassan] Rouhani were received very, very warmly, in their arrival to Teheran.

It was a great reception, including by the Green Movement suppressed when [Mahmoud] Ahmadinejad was elected for the second time [in 2009]. This expresses the desire of many, many people within Iran, and I think that some hardliners realize that there is a large segment of the Iranian population that want to move forward and have a fresh start.

This deal is very much limited to the nuclear program. It does not mention human rights, the hostility towards Israel… Is it possible to approach these other subjects later on?

Maybe. I think that it very much depends first on how are we going to conclude the whole process, because this is only an outline and not the entire thing, yet. But it is an eyes opening and it could open the door for some kind of a better dialogue.

But we have to take in consideration that there are elements in the Middle East, and not only in Israel, who are not happy with it, and don’t want to see current Iran receiving legitimacy.

Saudi Arabia, other states in the Gulf and Egypt are not happy, specially now with the issue of Yemen [a war against the Zaidi Shia rebels known as Houthis]. So, Iran will have to show that it has a new face and that’s go beyond the nuclear issue, but the tension is still in the nuclear issue. 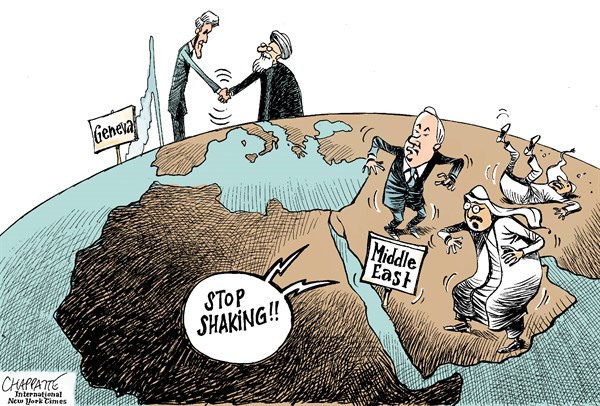 In your opinion, did the sanctions have real impact, and did they force Iran to accept this compromise?

I think so, yes! The sanctions were critical to change attitudes in Iran.

Some analysts say that the immediate effect will be felt after Europe lift their sanctions, because European companies are eager to be back to Iranian markets – the United States being the last one to do it…

As you said, there are several forces in the region that will never accept to offer legitimacy to Iran, in part due to the sectarian conflict Sunni versus Shia, but why is Iran so demonized by the international community and not Saudi Arabia, the country that has been exporting an extremist brand of Islam used by jihadists to propagate terror? Why is so difficult to give Iran a place at the table of nations while offering everything to Saudi Arabia, the source of inspiration of Al-Qaeda and of the so-called “Islamic State”? Sorry for being so naïve… but I really would like to understand.

Well, I think it is a little bit naïve. We have to think about at what extent Iran will have hegemony, influence in the Middle East much beyond its territory, because it has a great deal of interests in Lebanon, in Syria – even if this country is in civil war today –, in Iraq, where it influences a Shia-led government…

In the eyes of Saudi Arabia, the vanguard of Sunni Muslims, Iran is a threat. And Iran is seen often as using tactics of interventions, sometimes being a proxy, sometimes through terrorism, to make other countries very nervous, in particular in the Gulf. I am not surprise that Gulf countries such as Saudi Arabia and the United Arab Emirates are nervous.

Several analysts (Stephen Kinzer, being one of them, in his book called Reset) argue that it would be much better for America to have Iran as an ally than Saudi Arabia. What is your assessment?

I don’t think that the United States would easily abandon Saudi Arabia towards Iran. I don’t see that happen – anytime, in any possible future.

Why – because of the current Iranian regime?

In the eyes of the Saudis, Iran poses an existential threat to them. Moreover: they need to be reassured that they can rely on America as an ally. So, the credibility of the United States as an old friend, in what concerns Saudi Arabia, is very much on the line here.

For the Saudis, as you said, it’s a kind of existential challenge. What about Israel? Prime Minister Benjamin Netanyahu says ‘yes it is’, but other officials, some of them former Mossad chiefs [Meir Dagan and Efraim Halevy being the most vocal critics] have been underlining that the real threat to Israel is the Israeli occupation of Palestine not Iran. What is your opinion?

Benjamin Netanyahu is very much alone [when, for instance, he compares Iran to Germany’s Hitler or says that his “biggest fear is that Iran will honor the nuclear deal], in part, because in the views of many people he is not very much resolved into reach reconciliation in what concern the Israeli-Palestinian issue.

Many Israelis, including many with very good security credentials, don’t buy what Netanyahu says. If this agreement works, if Iran will prove that it will not be a problem for a generation, it could be a good time for doing other things.

Obviously, Netanyahu is very much interested in put aside the Palestinian issue because of the Iranian issue. Many Israelis with solid security credentials are not buying Netanyahu’s argument that Iran is an existencial threat.

If this agreement [in Lausanne] will work, at least if it is going to buy us time, that at least in a generation Iran is not a problem, that could be a good time to do other things. Obviously, Netanyahu wanted very much to put aside the Palestinian issue to focus on Iran.

This deal changed the agenda for him and made his job much more difficult in what regards the control of the Palestinian territories. He is not willing to give up on Iran because it will force him to change the entire agenda. 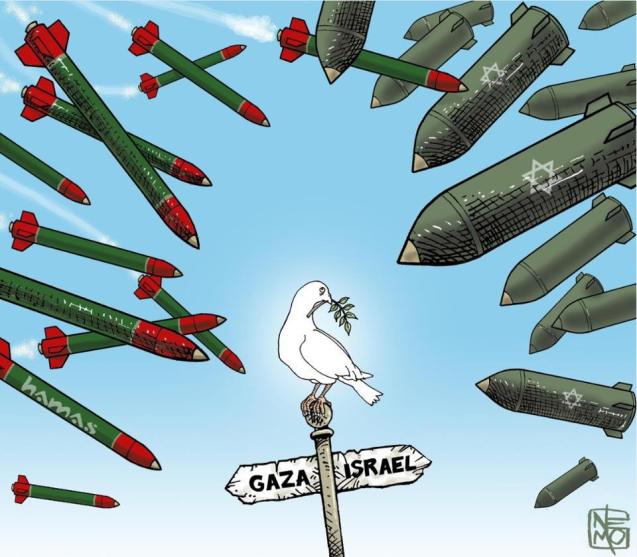 In your books and articles you say Israel had an existencial need of a nuclear program because of the Holocaust. Nonetheless, more recently you have been defending that it is time for Israel to abandon its long opaque nuclear policy and end the tabu…

… When I say it is the time, I do not mean: “Right now!” First, the Iranian nuclear problem must to be settled. Sometimes in the future, yes. When I wrote this, a few years ago, I said “in general”, and I agree with you.

For now, let’s settle the Iran issue first and not confuse both. It wouldn’t be wise. It would add confusion bringing this into the picture. At this point, it would not be useful or healthy to connect them.

Well, because it would complicate things. For the time being, Israel still has to internalize psychologically that they are not under any security and existential threat.

To bring now the [Israeli] nuclear issue into the openness, into the center, would invoke anxiety in Israel, and I don’t think it is wise to do it at this time, even if in principle. I think [that the end of the opacity policy] should be done sometime and that we cannot ignore it indefinitely.

First let the Iranian deal to be settled, to push for Israeli-Palestinian issue, and then put the nuclear Israel program as part of a overall deal, but not at this time.

Are you speaking of a generation’s timeframe?

Probably, it will be less than a generation. It will depends on what is going to happen, but in a few years from now.

If indeed we have a deal in June, it would force Israel and the world to deal primarily with the Palestinian issue. The Iranian issue will not be there anymore as a distraction. In that respect, it is good.

So, was it a defeat for Mr. Netanyahu in spite of his election victory and after he tried to embarrass the Obama Administration with his speech to the American Congress?

Part of this interview was included in an article published by the Portuguese weekly EXPRESSO, on April 11, 2015