Shyima Hall was eight-years old when her parents in Egypt sold her into forced bondage to repay an alleged debt. For the next four years she was exploited by a violent wealthy couple and only gained her freedom in 2002, after they moved to the US. Now 24, an American citizen living in California, she has published the autobiography Hidden Girl, to share her life story and raise awareness to the plight of millions of children trafficked around the world. (Read more…) 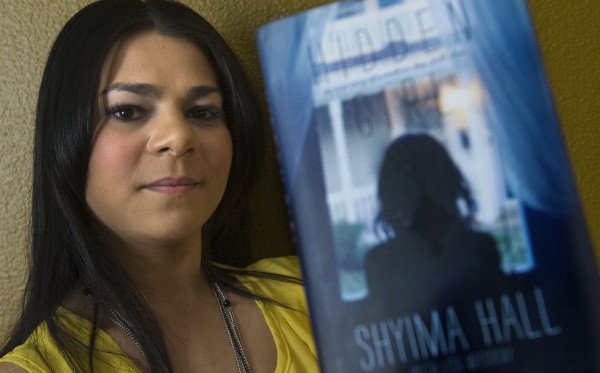 Shyima Hall with her memoir Hidden Girl, which discloses her experience as a child slave in Egypt and in the US
© Ana Venegas | The Orange County Register

My life drastically changed course the day my parents sold me into slavery. I was eight years old. For those who have not read your book, Hidden Girl, tell us how and why did that happen?

My sister [Shyima Hall is the seventh of 11 eleven children] had stolen money from her slave captors and my parents needed to settle her debt, so I was sold into slavery. My parents also needed money and I guess the few dollars they got for me was worth it to them.

…I was a domestic slave and did housework, so I did everything from taking care of the children, getting them ready for school, washing dishes, vacuuming, dusting, cleaning toilets, and anything else that needed to be done.

I worked sixteen or more hours every day and had no relationship with the parents or the children in the house, other than I was their slave.

I did what they told me to do and was never paid one dime, although my parents got a little money for me each month. When it came to eating, I could only eat one meal a day. It was in the evening after the family was through with their dinner. I ate their leftovers.

Even though I ate as much as I could then, I was always hungry a few hours later. Because I worked sixteen or more hours a day, I only slept a few hours a night. I was also slapped hard and regularly. When I was rescued it was discovered that I had a broken arm, although I have no memory of how that happened.

Would you still be a slave if the couple had not moved from Egypt to the United States?
Yes, I am sure I would be. The contract my parents had with The Mom and The Dad was for a certain period of time. I think it was ten years, but I have a feeling The Mom and The Dad would have found ways to extend the time period.

Did you ever get to know who, by informing the authorities, saved you from your torment?
I never did find out for sure who reported me, but I believe it was a neighbour who often saw me washing dishes late at night through the kitchen window.

I feel that justice was done. My captors went to jail and a lot of people now know about what they did. I had expected more jail time for them, but I was happy with their sentences and with the awareness that their trial brought.

Shyima Hall being interviewed by PBS. Here is the video

What happened to your captors after being released? Have they threatened you since then?

After, The Mom and The Dad [how she calls their captors] divorced and she went back to Egypt. He is still here in the United States and has remarried. Neither has threatened me and I am not afraid that they will. There is no reason for them to bother me.

I am no longer the uneducated little girl I once was. I can stand up for myself now and have good friends who love and support me.

Your biological family never supported you – how do you explain the rejection? Have you forgiven them ?

I have no idea what my biological parents were thinking when they gave me up and I struggled with that for so long. How do you give up a child into slavery? I am still torn apart when I think about it too much. Sometimes I can forgive them, but at other times I am still very angry. After my rescue I spoke with family members every few years, but I have not spoken to any of them since 2009.

Do you contemplate going back to Egypt one day?

Yes, I want to go back to Egypt some day and visit my brothers and sisters. We lead such different lives now that I am not sure we have anything left in common, but someday I would like to see them.

You are a mother now. At what extent do your painful childhood experiences affect the education of your daughter?

I know that my experience as a slave makes me a stronger mother. I can never, ever imagine selling my daughter into slavery! Because I did not have any good moms for role models, rather than do what The Mom or some of my foster moms did, I do the opposite. Rather than be mean and hateful, I love and encourage. A lot is instinctive.

I just love my daughter. I want her to grow up to be a strong, independent woman, one who can make good choices for herself. I want her to have it all. 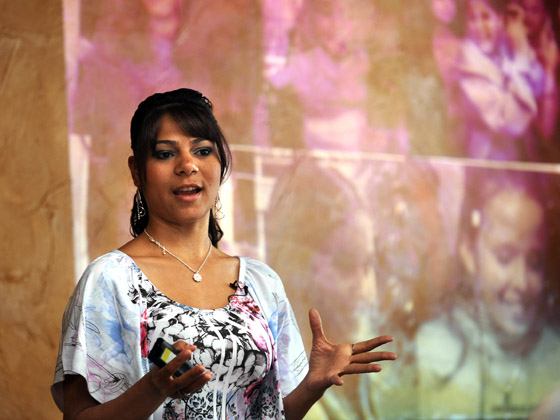 Shyima Hall describes her experience as a slave to a family in Irvine as she stands in front of photos of the young girls she cared for, September 13, 2009
© Ana Venegas | The Orange County Register

Why did you wait one decade after being freed to write Hidden Girl, and what do you intend to achieve with this book?

I spent the first ten years after I was rescued getting an education, learning English, and learning social skills and other important lessons I would need in life. I had missed so much of that in the childhood that had been taken from me.

Also, the case against my captors did not finish until 2007 and I could not write about them until they had been tried. Plus, I wanted the book to have a happy ending.

The first ten years after being rescued I was still recovering from slavery. I wasn’t mentally strong enough to say what needed to be said in a book. But, I have since become an American citizen and live a very happy life.

Now that the book is out, I hope everyone becomes more aware of human trafficking. I hope people keep their eyes open and contact an authority if they suspect someone is being held against his or her will. So many people are shocked that this is still going on and I am here to tell you that it goes on a lot!

Are you already preparing yourself to fulfil the dream of being a “police officer or an immigration agent”? How can these jobs make a difference?

Yes, now that my daughter is two, I am currently looking into different departments and exploring my options. I know I can make a big difference in helping victims. Because I once was a victim, I understand their perspective. I know what they are going through, how they think, what they need to feel safe. Not many in law enforcement have that kind of experience.

You found a new home in America. Are you happy?

Yes. I am very, very happy, and am living a good life here in America.

Parts of this interview, edited for clarification, were included in an article about the global campaign “End Child Slavery Week”  published in the Portuguese newspaper EXPRESSO, on November 22 , 2014