It was a “social revolution”, according to The New York Times. A 2012 royal decree banned male staff from selling female underwear, and this ban was extended to cosmetic shops. It was also a victory to Mrs. Reem Asaad, an academic, writer and activist, who led a campaign on Facebook to get women working in lingerie shops rather than men. This is an email interview for an article published in a Portuguese newspaper. In 2012, Reem Asaad was ranked as the “third most powerful women” by Arabian Business Magazine top 50 list. (Read more…) 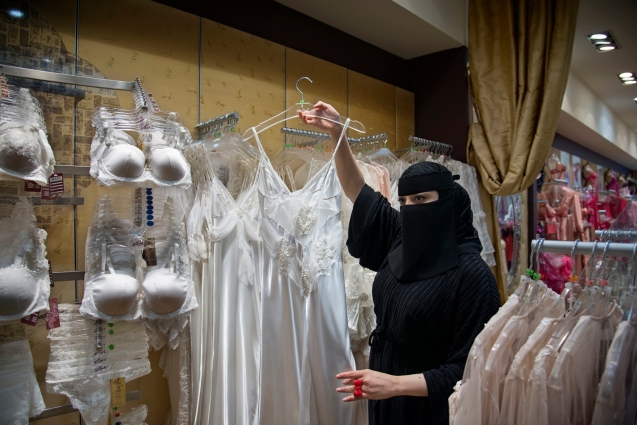 Twenty-seven-year-old Nermin, an employee at Nayomi, a lingerie store. She started working eighteen months ago as a salesclerk; recently, she was promoted to a position in which she oversees hiring and staff training across four Saudi provinces. “I was surprised to find that I like to work,” Nermin said “Nayomi gave me the chance to go on with my life”
© Kate Brooks Photography | The New Yorker

Saudi national Reem Asaad was born in Cairo, Egypt, in December 1971. Married, with two daughters, her husband is one of her “biggest supporters”. She has an MBA from Northeastern University in Boston and a BSc from King Abdulaziz University in Jeddah.

A lecturer in Finance and Investment at the Dar-al-Hekmah girl’s college in Jeddah, she is also a contributor writer to  Al Eqtisadiah and Al Tadawul magazines.

Dar Al-Hekma is an elite private college for women. “Its’ mission and vision aim at achieving worldly standard of education for women in Saudi Arabia”, Reem said. Al-Eqtesadiah is the primary financial daily newspaper in Saudi Arabia, which covers all areas of the economy from employment to the stock market, as well as world financial news.

Tadawul is the official monthly periodical supervised by the Capital Market Authority, widely read by bankers and financial market heads in the Kingdom.

How did the public and the shop owners react to your campaign to boycott lingerie shops with no women staff in Saudi Arabia?

Reem Asaad – Reaction from the public has been positive and quite refreshing. Support came from within Saudi residents, citizens as well as internationally. The younger are excited, the older are asking more questions about the do ability. 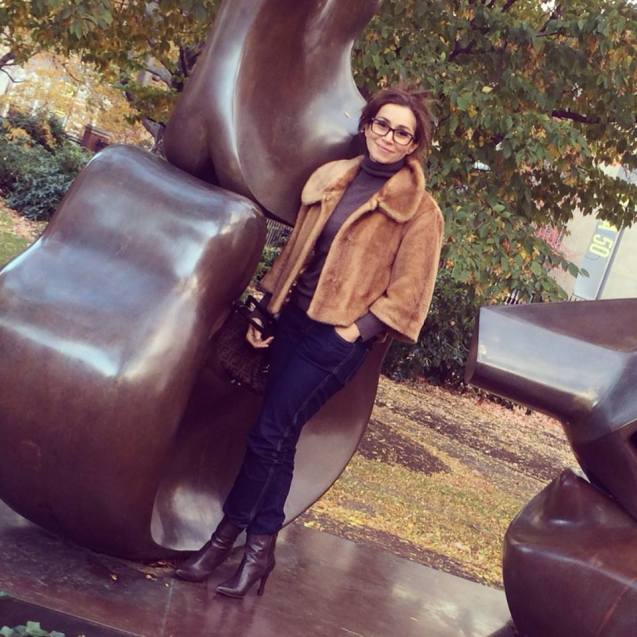 Are sales already being affected? What companies and labels are you boycotting? What are the shopping alternatives to women?

It is hard to find out if sales are impacted for sure, but you get the general sentiment and verbal support as gauges of success. Most of the retail companies are franchises or local distributors for international brands, who are not publicly listed in the local markets.

It is impossible to view their statements. Luckily, in Saudi it is quite easy to get a feeling of the market by asking customers and talking to people. Alternative channels are becoming more available (Internet, home stores, shopping abroad). However, these channels are not a complete alternative to key distribution window.

Why did you begin this campaign? Was there a particular humiliating situation?

The increasing need for a better shopping experience was the main driver behind the campaign. Many stories can be cited as examples.

The BBC reported that, when buying their underwear, women have to pay before trying them, and have to go either at public toilets or at home since there are no fitting rooms in shops. Is it true? Is it also true that shops accepting female clerks have to block the windows and get security guards at the door to prevent men to go in?

Yes. There are no fitting rooms in most apparel stores in Saudi, unless the store is ‘women only’. Usually, if the customer needs to try a garment on, she has to either pay for it, take it home and promise to return in 24 hours for a refund (only some stores allow that), or just buy it and incur a loss.

Yes, it is also true to ‘women only’ stores must have tinted windows and secured doors with a sign at the door indicating that this is a ‘women only’ store. Guards are installed outside to prevent men from walking in. 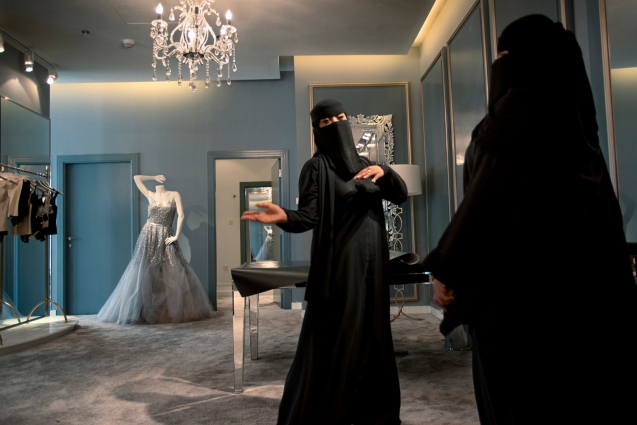 Two Saudi saleswomen in Harvey Nichols, the British luxury department store, in Riyadh. In 2011, the Ministry of Labor ordered shops specializing in cosmetics, abayas, and wedding dresses, along with the women’s sections of department stores, to begin shifting to all-female Saudi sales staffs. The process is called “feminization”
© Kate Brooks Photography | The New Yorker

Somehow, it looks like a paradox having lingerie shops with only male (and mainly foreign) staff in a country where men and women outside the family circle cannot mix. On the other hand, it also looks like a contradiction to demand that “ONLY females may be employed in women lingerie shops”? How do you explain gender segregation in “modern world” labor market?

Demanding women to handle sales and customer service does not prevent men from visiting the store. And if we have to buy lingerie, it would be more logical to buy it from a women-only store than from a male salesperson.

In ultra conservative societies, you can only ask for change to come gradually. In all world countries, including Portugal, only women sell lingerie [not true in the case of Portugal]. We are calling for a standard practice.

Sara, age twenty-seven, works at the Dior cosmetics counter at Harvey Nichols. Many saleswomen report that their families treat them differently now that they are financially independent. “Husbands respect women who are working,” Sara said
© Kate Brooks Photography | The New Yorker

Some analysts, as Hirah Azhar, in Saudi Gazette, noticed that you “bypassed the traditionalists and the Government to direct [your] wrath instead on the retail industry”. Was it a deliberate move to avoid confrontation with the political/religious establishment, even if the necessary legislation was approved in 2006?

I would rather avoid using dramatic words such as ‘wrath’ and ‘bypassing the government”. First, I am not enraged.

I am defending women’s consumer rights. Second, the campaign does not bypass the government. The government already issued a law stating what the campaign is calling for – back in 2006. It was never implemented.

Is the reluctance of the retail industry to employ women in lingerie shops related to the high rate of unemployed men? Or it is only the perpetuation of a social taboo that “a woman’s place is at home”?

This is one reason. However, one of the things we are trying to highlight is that respecting women’s privacy and consumer rights comes first.

Secondly, the lingerie retail sub-sector is not the key hub for Saudi employment and therefore it will by no means threaten employment opportunities for men in the country.

Your campaign, said Arab News columnist Abeer Mishkhas, “might end without a result”, because it’s not “fighting a concrete law or body”. Do you agree or are you confident, now that King Abdullah introduced significant changes in political, judicial and religious institutions, including the appointment of a woman to the government?

Some saleswomen report that they have more freedom now for occasional socializing, although the more conservative of them work only because they need the money.
© Kate Brooks Photography | The New Yorker

[On January 5, 2012, a royal decree by King Abdullah came into effect, banning male staff from selling female underwear. According to the BBC, “the new law could potentially create up to 40,000 jobs for ordinary Saudi women who have hitherto had little or no access to employment.But it also means that male clerks, most of whom are foreign workers, will be out of a job.” The ban on male staff in lingerie departments was extended to cosmetics shops from July, same year.]